Self control. Not always a good thing. 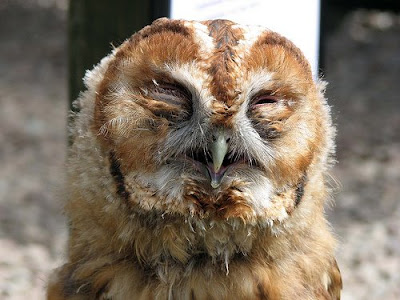 Every year, I forget how awful my allergies are--that is, until the very tail end of summer. Even then, it usually takes ten to fifteen days of dragging around and feeling really, really bad before I remember, "Oh, yeah. I'm allergic to September."

It can be pretty miserable. Everything itches. Or drips. Or both.

For me, the eyes are the worst. But I've learned that if I touch them--no matter how much I want to--I'm done for. So I developed a work-around.

Whenever I feel the urge to rub, instead, I just scrunch my eyes up really, really tight. And you know what? It really doesn't do a thing in the world to alleviate the pain or the itching. But it does, somehow, help me feel a little less helpless.

Yesterday, after I had smooshed up for about the fourth time in an hour, I realized that I had no real idea how many times during the day I was exercising this maneuver. And that's when I had a terrible revelation.

It is entirely possible that I've conditioned myself into a facial tic.

--And not just your standard, run-of-the-mill, microsecond twitch, but a full-blown, face-distorting, wrinkle-inducing, Tourette's-quality spasm.

So, please. If you see me, and I'm scrunching and smooshing, tell me to stop. An intervention may be my only hope.

I have terrible allergies. I've subjected myself to full on testing (lots of needles involved), and I must say, being on real meds, consistently, HELPS. If eyes are your biggest problem, you might like Pataday eye drops. They've been great for me. (and no, I'm not a drug rep, just a happy patient)

I'm on those drops! You should have seen me before I was medicated. I think I need the next generation eye drop. Thanks for the advice, though.

There may be a 12-step program for this...I'll ask around.