Give me your tired, your poor, your bare-legged. 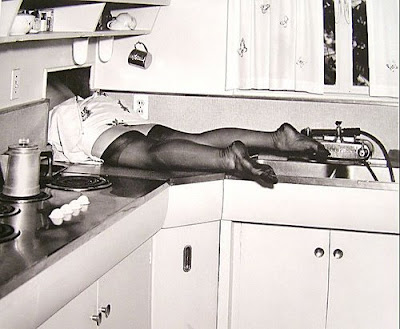 One way to tell America is flirting with the idea of hard times?

We start inventing bizarre ways to reuse things most of us aren't even using anymore.

For instance: This past Sunday I found an article detailing all the things one might do to wring the last bit of life out of that old raggedy pair of pantyhose. It's worth noting, I believe, that this is the second article I've seen about this.

Apparently, I live under a rock. I had no idea we had a used pantyhose problem in this country. I can't decide what part of the article disturbed me the most: the idea of a household filled to the rafters with items that used to be pantyhose, or the fact that anybody, anywhere is still wearing them.

I know, I know. Everybody's trying to be green. But for heaven's sake--my grandmother used to do stuff like this. Sure enough, the first item on the list? Tie up plants that need to be staked. If a row of tomato plants tied up with old pantyhose doesn't say "Grandma" to you, then you must have one of those fancy-pants grandmas.

I just can't help thinking that if being green is what everybody's after, maybe we just shouldn't buy the damned things in the first place. Don't they have to process a bunch of petroleum and then melt it down with old tires to make a pair of pantyhose? That can't be good for the earth.

And I have to tell you--since I stopped wearing them, my earth is definitely better.


Next week: My tutorial for how to make a hat for your dog from an old brassiere.


image, Foxtongue's photostream. And no, I have no idea. I would be afraid to speculate.

I have a feeling my 85 pound mutt, Bessie, would maul me in my sleep if I put a hat made of a bra on her head.

And I'm with you, I don't even own a single pair of pantyhose. They're uncomfortable and unnecessary, and if the concern is that my legs will be cold, I'll just wear pants, thanks.