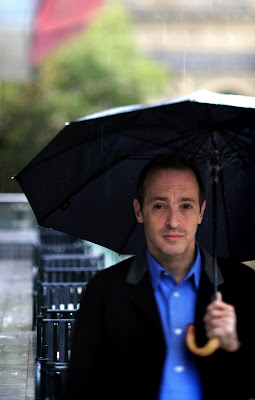 I guess I'm a little out of touch, because I only just heard about the scrutiny being given to David Sedaris' stories. Last year, Alex Heard got a bee in his bonnet and wrote a piece for the New Republic that got some people all worked up about whether or not Sedaris' autobiographical stories are factual enough to be considered proper nonfiction. Now that Sedaris has a new book out, it's all being recycled into the intertubular conversation. (I'm not linking to it. Google it yourself, if you just have to know.)
But that's how it is. Once burned, twice shy. Reporter Stephen Glass was fired for making stuff up under the guise of investigative journalism. Janet Cooke's fake Washington Post story won a Pulitzer. (Oh sure. Make up one 8-year-old heroin addict, and ruin things for everyone else.) And then, of course, James Frey had the temerity to go and lie to Oprah, of all people.

And you know what? I don't care. You can shelve a Sedaris book anywhere in the store you like. Prop him up right next to the Garfield and Family Circus books, for all I care. Just let me know where you decide, so I can find him when I have my book money on me. Speaking as a reader, David Sedaris' books are as factual as I need them to be.

And as a writer--well, I wouldn't satisfy Alex Heard, either. Word up--I lie all the time. Just ask any of the people I've written about.

Oprah can just deal with it.

When you figure out where they put Sedaris, let me know. I could never find him in Hastings. While your at it...see if you can find a bookstore near me. I don't know where those are either.

We just missed him in Boise by that much. Would have been fun to see him. And I'll never forget who introduced us...