If you've seen one juke joint... 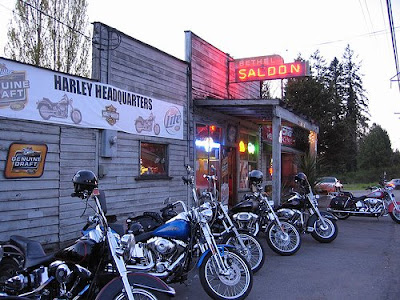 I think I mentioned that I was joining my mother in Hot Springs for vacation last week.
While driving about and seeing all that there was to see, I pointed out a bar on the side of the road.
"Oooh, I've been there! They have this great setup in the yard out back, where you can hear live blues music on the weekend! Really good barbecue, too."
"Really?" she said. "I wouldn't have thought so to look at it. I'll have to find it on the weekend and give it a try."
It wasn't until I thought about it later at home that I realized the bar I was thinking about probably wasn't in Hot Springs, but was instead located in Fort Smith. I'll have to email the guy I was with before I can say with certainty, but already I'm pretty sure that I've never been to the bar I pointed out to my mother.
Now I can't decide whether to tell my mom that I was mistaken, or just wait until she calls to tell me about her Saturday night at the biker bar.

I'm leaning pretty heavily toward the latter.
Although this image looks very much like the bar discussed above, it is almost certainly not the same bar. The picture of this bar is via Lana aka badgrl's flickr photostream.