The city of angels plus one. 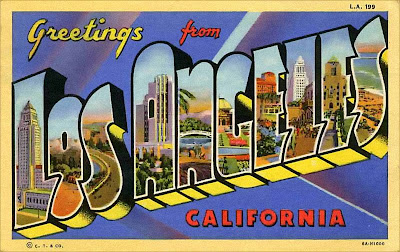 Muffin Uptown is headed to LA.

She's only there for a couple months--just long enough to complete a 300 hour internship. This internship is all that stands between her and a future as professional grad student.

Talk to her dad, though, and you might think she were headed for Mogadishu. He's scared to pieces.

It's hard not to worry. It's not a paying gig, and who knows if she has enough money? She has an apartment, but no furniture. She's 22, but she looks 16. Weirdos, Bloods and Crips, and actors live in LA. What about the LA Freeway? Earthquakes? Paula Abdul?

All kinds of things could happen.

But if he thinks it through, I suspect MU's dad might find that his biggest fear is really the same one that wakes me up at night--that this may be just the first step of many that will take her further and further away from us.

And it is. If we've done our part right, it has to be.