Having a REALLY good day at work. 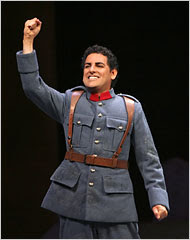 Real life is eating into my blogging time. But here's a little something for your trouble.
For the first time in 14 years, the audience at the Met demanded and received an encore of a solo performance. Tenor Juan Diego Flórez sang the nine high C’s in the aria “Ah! Mes Amis” and then--at the audience's urging--sang them again.

Apparently, Mr. Flórez is somewhat of an operatic rabble rouser, having violated a 75-year encore ban at the Teatro alla Scala in Milan last year.