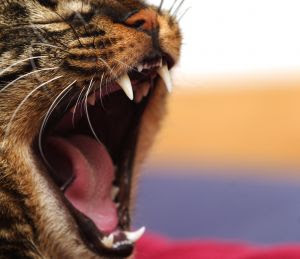 NEW MEXICO (Reuters) - A survivor of Monday's vicious cat attack at a New Mexico residence told the paper last evening that no waving or yelling at the animal occurred before it struck, a newspaper reported today.

Muffin Uptown, 21, said she was sitting in her grandmother's living room when the animal attacked her, the New Mexico Chronicle said, citing a police document filed in court.

Police are confident that the attack was not provoked by taunting. The 45-pound, gray calico named Penny has a history of aggressive and abusive behavior.

According to authorities, the animal scaled a large mission-style chair to attack Ms. Uptown. The cat mauled the girl, impaling one of her right fingers with an extremely long and potentially lethal claw, which neither the cat nor Ms. Uptown could then dislodge.

"I was just sitting there and the cat walked by and looked up, like 'howyadoin'"? So I reached my hand out for her to have a sniff. I DID NOT PET HER. I didn't make a move to touch her at all. All of a sudden, she had my hand and was dragging me off the chair and into the floor."

Family standing in the nearby kitchen heard Ms. Uptown's cries of "OwOwOwOwOWOWOW," and ran into the living area to investigate. Several adults were required to disengage the animal from its human prey.

Ms. Uptown, who is an artist, declined to speculate on whether or not her injuries may affect her future career. She was, however, openly pessimistic about the future of the cat.