A long, strange trip. Every day. 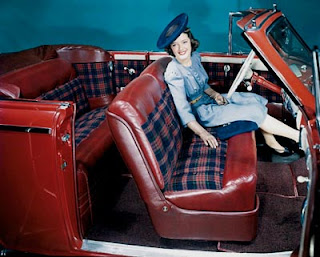 For the past two weeks, I've been carpooling to and from work with three other people. After almost three years of commuting, I was starting to feel the loss of those 8 hours each week that served no productive purpose other than getting me from one place to another.
I was having a hard time getting out of the house in the morning and away from the office in the afternoon, getting up so early that I was making myself late for work and leaving the office long after the sun had gone down again. Going home late on winter evenings, I can tell you that when the view outside the driver's side window looks for all the world like the inside of a cow, it's easy to miss a turn and end up taking that ride on the wild side, that feels a little too much like the setup for a Stephen King short story.
In three of the four cars, it's a bit of a squeeze. Moosh in four women with purses, lunches, knitting, laptops, and what-have-you, and it's the bus to Cartagena, sans chickens. And although these are people I know only slightly, it turns out that I have no qualms whatsoever with allowing my head to fall over the back of the seat while my uvula flaps noisily about. That's the thing about those come as you are naps--they are no respecters of time, place, or dignity.
Still and all, I'd like to see it through. I'm feeling more rested, I'm getting in to work early enough to make coffee for everyone, and I'm leaving the office right at leaving-the-office-time. Also, though, I think material world girl has started a pool, so that if I quit or am thrown out, somebody will win some big money.
And you know I'll never see a damn dime of it.