You only thought I'd said my peace about poultry. 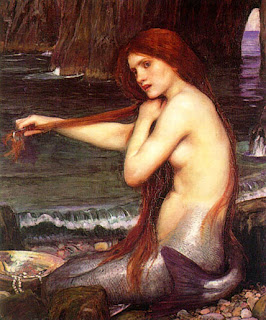 Despite the siren call of other, more interesting things--despite having heard the mermaids singing, each to each--despite wishing with all my might for another, any other option, I did find my way to the grocery store, where I stood for the better part of half an hour, planted squarely and immovably in front of the frozen bird bin.
Positioned as I was in the center of the aisle, in the center of the bin, I could feel more than I could see the other shoppers' ire as they were forced to part for me like the Red Sea. Yet there I stayed. I had to choose a turkey; my extended family's Thanksgiving happiness depended upon me.
But which one? They were all so large. If I weren't planning to eat it, I could have positioned any one of them in the foyer at home to frighten away intruders. I held my hand out over the vast, frozen expanse of poultry, waiting for some nudge from my so-often-caught-napping feminine intuition. What I needed was a sign. Or a divining rod.

I needed to call somebody.
Call one: My mother. Even though she lives on the other side of the continental US, smack dab in the middle of the New Mexican desert, she was sitting at that moment, I knew, waiting to hear from me. Because this is what mothers do.
Come to think of it, she wasn't answering my call at turkey-choosing time last year, either.
Call two: My trusted friend Tawana. Under ordinary circumstances--say, if I needed a plan to avoid being killed and eaten at work, or if I needed to know what hand beat a full house, Tawana would be relatively close to the top of the call list. Previous experience, however, has shown that like me, she has forgotten most of what she used to know of the homemaking arts. She will advise me, instead to call Carol. Unfortunately, Carol was also not taking my call.
Don't any of these people care if they have a bird to eat on Thursday?
I stole a glance at the woman standing nearest me. She seemed capable enough. She was feeding somebody with some measure of success; there was a child with her who didn't look too neglected.
"How much bird would you say I needed to feed 11-to-15 people?" I asked.
She looked at me with that certainty that all young mothers seem to have. I used to be one, though, and I recognize this particular act. Pretend you know what you're doing so the children won't stage a coup and overthrow you for someone more sympathetic to their cause.
She leaned in to whisper, and this part is true, I swear--she glanced about, first. "I never know, either," she said. "I always just buy the biggest one." She shrugged. "But at least we always have enough."
But I was well aware that the bigger the turkey, the more disgusting that whole naked bird wrestling ballet would be on Thanksgiving morning. So I did the only thing, really, left to me to do.
I wheeled my cart back to the deli section and after a quick confab with the woman behind the counter, carried my already-fully-cooked, no-giblets-inserted, guaranteed-to-feed-the-whole-crowd, just-pop-it-into-the-oven-at-7am bird to the checkout line.
And it was worth every penny.