When the evening train goes by. 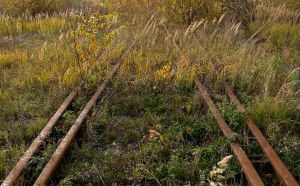 There are some train tracks running through town about a quarter mile from the back of my house. The train doesn't rattle your teeth or make the pictures leap and buck on the wall when it goes by. It won't wake you from a sound sleep. But it's close enough that you know it's there when it does. You may even say, "There goes the train," if there happens to be a lull in conversation.
This isn't a unique arrangement. There aren't many places you can live in this part of the country without sharing at least a passing acquaintance with the railway system. It's one of those things you learn to ignore--like the sound of heavy traffic if you live close to the interstate highway or the comings and goings of aircraft if your house is near the airport. On an unusually warm November day though, when all the windows are open to try and catch enough fresh air to last until late March or early April, you'll hear the train when it passes. And as categories of noise go, it's not bad at all.
Now that I've traveled on one, the trains sound differently to me. They used to have that lonesome whistle Hank Williams wrote about. Now, though, the trains sound to me like the places they're going, and the hundreds of tiny little towns they're passing through to get there. I can sit on my stoop and listen to all those places as they pass me on by, traveling just a little better than 60 miles an hour, right there behind my house.
Yup. Way better than living by the airport.

Train sounds are probably imprinted on my DNA. My home for my first 19 years was within a half of a mile of the tracks. Then I was ripped from my family’s arms and deposited on a semi-tropical island with NO trains. My wonderful in-laws parked by the tracks to record for us the sound of Amtrak going by.