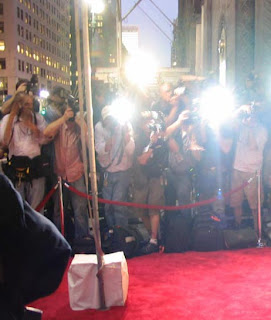 Sighted leaving her west village brownstone on Thursday, the elusive Funny was noncommittal about her next appearance in Mundane Jane's blog.
"You know, I'm tired. There's no reason why I have to be the star of the show every damn day. Why can't Frankly Quite Touching take a shift every now and then? She's in the union. Or Slightly Humorous--what about her? She's every bit as capable as me. And listen, if you've seen her wardrobe, you know she could really use the work."
Pressed further for a commitment, Funny acknowledged that she anticipated a return to the blog no later than week's end. She really hoped, she said, to be finished grading papers and back to normal by then.
"I've just not been myself lately," she explained. "Even when everything is going right, being Funny is not as easy as most people think. But when you're grading essay papers night after night--believe-you-me, the job gets a lot harder. "
"Just wait until I'm finished with those papers and then I can be Funny again," she said. "But right now--well, it's just not possible to laugh in the face of this much suffering."