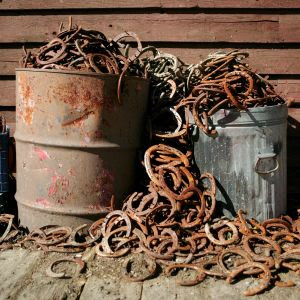 On the night of my first date with Muffin Uptown's dad, he wore a pair of shoes that frightened me so much that had my better nature not won out, MU might not exist today.
They were brown, smooth-sided loafers with tan mock-crock uppers and long, twisty black tassels. Obviously, whatever else he had planned for our date together, the evening would definitely include strangers snickering into their hats at his unfortunate choice of footwear. What I wanted most in the world after seeing those shoes was to step back into my apartment, quietly close the door, and see what was on TV.
What I did instead was tell myself that ugly shoes were only ugly shoes, and not an indication of the owner's character. Surely, everyone has at least one pair of really ugly shoes? When we married four years later, I secretly gave the shoes to Goodwill. I'm fairly certain that they have them still.
This might seem--on the face of it--to be a positive story about the strength of my character, even at such a young and unformed aged, and about how reasonable and fair-minded I can be when presented the opportunity.
No. That's not it.
Because here's the thing about a pair of nasty shoes: sometimes, they belong to an otherwise good and kind person who is just confused about below-the-knees fashion. At other times, though, a pair of ugly shoes really can be a reflection of what's going on inside; they are The Shoes of Dorian Gray. It is even possible, in extreme cases, to take one glance at a person's run-down shoes and know that a relationship with this person carries with it the potential for real disaster. Don't go into business with him. For God's sake don't marry him. In instances like these, you probably shouldn't even let a guy like this fiddle with the preset buttons on your radio.
So how do you tell the difference? Like I would know. My history is populated with husbands wearing bad shoes. Most of the time, I just focused on not looking at their feet. Sometimes, though, I think about asking MU's dad.
He was always sending me back into the house to change my shoes before we could go to dinner.
photo, Marjolijn van Mastrigt