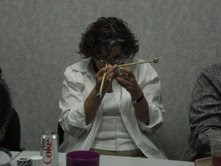 Not my noggin, obviously. Anyone looking at this picture can plainly see that this activity is definitely not doing my noggin a bit of good.

Just for the record, this is me trying to coax my stitches onto the wrong needle--something my friend Mary tells me I must do to perfect the i-cord. At least that's what she says. Now that I've seen the picture, I think this was a conspiracy hatched up to capture me on film in my natural state--all knotted up and confused. (Do you think I should be concerned that the photographer of this shot is my boss?) The i-cord should have given me some clue, now that I think about it--it sounds like something you have to pull to make your chute open so you don't get CSI'ed all over the pavement.

Although Cheryl over at Material World loves to dis her own knitting, she doesn't have a clue when it comes to cluelessness. I happen to have it on good authority that she actually completed an article of clothing that a human being (albeit a tiny one) can actually wear. I, on the other hand specialize in pushing the yarn around until it looks like something that's ready to rip out again. I don't like to brag, but I have completed hundreds of ripped out projects, each one more ripped out than the one before.
Okay, enough of this foolishness. Get your hook or your needle and help us whip up 30,000 hats for Arkansas Children's Hospital by October by October 14. All the really cool busy and important publishing professionals are doing it.

Umm, hate to mention it, but "I cord" is the shortened and made-politically-correct moniker for what EZ originally called "Idiot Cord". Not that that has any connection or anything,

Wow. That's even funnier than what I actually wrote.